Secrets of the tomb of Neferinpu 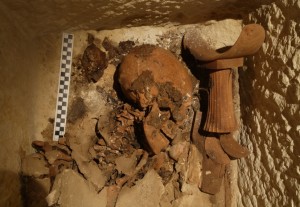 The story of the exploration of the mysterious tomb of priest Neferinpu, who lived in ancient Egypt in the 24th century BC has been unfolding already for two years and its end is still nowhere within our sight. The tomb was discovered in the spring of 2006, and in the same season, the chapel which housed the cult of this priest and other members of his family was also brought to light.

The tomb itself measured 14 x 9 meters and the eastern part of its superstructure contained a long corridor chapel, to the west of which there are the mouths of five shafts. The shafts lead to the tomb’s substructure and to five burials, four of which have been examined hitherto. The chapel also contained, still in situ, the lower part of the so-called false door, a magical gate which connected the ancient Egyptians with the realm of the dead to the west of the Nile valley. The decoration of the limestone door was executed in unusually high quality and besides Neferinpu’s name and idealized figure, the decoration included also the list his titles. Therefore we know that he was employed as a mortuary priest in the Abusir pyramid complexes of kings Neferirkare and Niuserre, where the Czech team has been working since the 1970s under the direction of Professor Miroslav Verner. The chapel had originally contained another three false doors, these have, however, been destroyed probably already in antiquity.

Neferinpu was also a king’s confidant, overseer of the judgement hall, priest of the goddess of justice Maat, royal herald and priest of the sun god Re in the sun temple at Abu Ghurab. Such a sequence of titles is typical for ancient Egyptian officials, who could hold both priestly and secular offices.

The burial chamber was explored during last November, and it necessitated the cooperation of a number of scholars and scientists from various fields. The burial chamber was well hidden at the bottom of a 10 meters deep shaft, and the entrance was covered by a wall of stones and bricks. After this wall had been carefully dismantled, the entrance to the burial chamber appeared. The chamber measured approximately 4 x 2 m and was a little less than 1.30 m high, and it was to a large extent occupied by a large limestone sarcophagus containing the intact body of the ancient Egyptian dignitary. Items of burial equipment were scattered around the sarcophagus, including 10 beer jars with sealings, wooden canopic chest with four limestone cases for the mummified viscera, 75 limestone vessels for symbolic offerings of food and drinks, offerings of beef, and a stone blade. The beer jars (one for each day of the ancient Egyptian week) should have originally contained beer, but as the ancient Egyptians were usually rather pragmatic even in their faith, they filled them only with Nile mud to lower the expenses.

The greatest surprise, however, was the burial itself. After the lid has been shifted aside under very strict security measures, we were looking at the badly mummified and almost destroyed body of Neferinpu himself and at his personal belongings. He lay stretched out on his back and with his head to the north. Along his left side there was a long wooden staff decorated with golden strips, and his left hand held the kherep sceptre, a symbol of his high rank and authority. At his left shoulder there was a beautiful wooden head-rest and somewhat closer, a small alabaster vessel originally containing aromatic oil. He was also wearing a golden collar. His arms, head and wrists were decorated with bracelets of faience beads, of which several hundreds were found.

According to preliminary anthropological findings, Neferinpu died at the age of approximately 50 years – this means that he reached quite an old age for an ancient Egyptian.

Years 2008 and 2009 should bring the final answer to the numerous questions connected with this tomb, above all with respect to the additional unexplored underground rooms, which are still awaiting the archaeologists in the tomb. Even now it is, however, clear that his intact burial chamber represents a unique source of knowledge for the many disciplines that are employed in the course of Czech excavations on the pyramid field at Abusir. 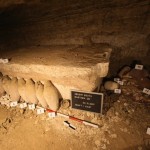 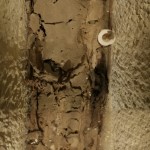 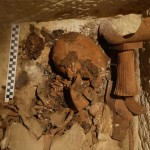 Detail of the skull of Neferinpu (photo Martin Frouz) 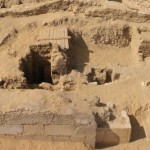 Detail of the false door of Neferinpu (photo Martin Frouz)

Úvod > News > Secrets of the tomb of Neferinpu