On the 16th October 2009, the Czech Institute of Egyptology, Faculty of Arts, Charles University in Prague, and the Faculty of Environment, University of J. E. Purkyně in Ústí nad Labem, launched a long-term interdisciplinary research project in the Republic of Sudan.

The fieldwork in the Sudan was commenced as early as the second half of October 2009 by a geoarchaeological expedition that worked for two weeks in the area of the Sixth Nile Cataract (Sabaloka) about 70 kilometres to the north of Khartoum. The objective of the geoarchaeological research project, in which the Czech Institute of Egyptology co-operated with the Institute of Geology of the Czech Academy of Sciences, was to attain better understanding of the history of the Nile, climatic changes in the Holocene, and their impact both on the landscape and the human society.

In order to achieve the stated objective, the expedition first carried out a three-day overall reconnaissance of the terrain by boat and thereafter split into a geological and archaeological unit that worked independent of each other on the fulfilment of the scientific tasks of the mission. The geological unit (Lenka Lisá and Pavel Lisý), entrusted with the study of alluvial deposits of the Nile, excavated, documented, and took samples from four profiles in the Nile deposits. The samples will be submitted to a number of specialist analyses. 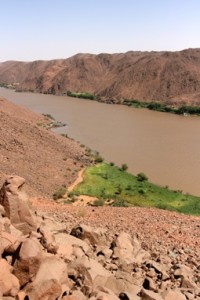 The archaeological unit (Lenka Suková, Václav Cílek and Murtada Bushara) carried out an on-foot survey of selected areas on both banks of the Nile, significant from the point of view of archaeology, geology, landscape and rock-art, with the aim to attain better understanding of the history of wadis as the tributaries of the Nile, to verify the settlement pattern and land-use of this area in various periods of the past, to get to know the distribution and context of the rock art in the region, and to take samples of the rock crusts and desert varnish in connection with rock art.

The geoarchaeological research in the area of the Sixth Nile Cataract was financed from the funds granted by the Grant Agency of the Charles University in Prague (project No. 259 025) and by the Czech Academy of Sciences (international co-operation project No. M100130902).

For more information on the interdisciplinary research project of the Czech Institute of Egyptology in the Sudan, go    here.