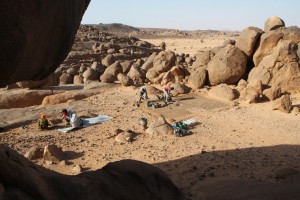 The Czech scientific expedition under the auspices of the Czech Institute of Egyptology, Faculty of Arts, Charles University in Prague, discovered in Central Sudan one of the largest cemeteries of hunter-fisher-gatherers in North Africa, containing according to the estimates ca. 400–450 burials. This extraordinary cemetery, which falls within the 8th–6th millennia B.C., is located in the Sabaloka Mountains at the Sixth Nile Cataract, ca. 80 km north of the Sudan´s capital Khartoum.

The area of the mountains, which had not been explored prior to the arrival of the Czech scientific mission in 2009, is currently endangered by the projected construction of a dam at the Sixth Nile Cataract. The broadly conceived archaeological exploration of prehistoric occupation of this area, with the participation of a number of specialists from diverse fields of natural sciences, significantly contributes to the understanding of the evolution of the earliest complex societies on the Nile by bringing to light priceless evidence of way of life and economy of the hunter-fisher-gatherers and the beginnings of cattle herding. A wide range of finds collected up to now is currently being treated and analysed in the Czech Republic. These include an outstanding collection of objects used for decorating human body – beads and pendants made of shell, ostrich eggshell and bone – and fragments of pins and cosmetic implements made of bone and perhaps also horn and decorated with incised geometric designs.

In addition to the cemetery, the mission in the Sabaloka Mountains has uncovered and partly excavated a settlement structure ranging with its density and abundance of remains among the most significant archaeological areas dated to the period prior to the beginnings of agriculture in Northeast Africa. The network of occupation sites was structured around now extinct lake, detected by the Czech mission, which constituted a key source of food and whose preserved sediments represent an extraordinary source for the reconstruction of the changes of environment and climate in Northeast Africa in the past. A scientific treasure of a kind are the very skeletal remains of nearly thirty individuals hitherto retrieved from the newly discovered cemetery, which provide unique information about the state of health and living conditions of the local hunter-gatherer populations. 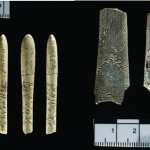 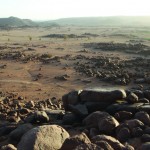 View of the area of the extinct prehistoric lake, Sabaloka Mountains, Sudan, research of the Czech Institute of Egyptology (photo Ladislav Varadzin).