Czech Institute of Egyptology on the Internet 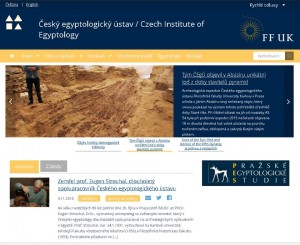 For humanities, the easiest and most accessible way to present the results of their research is currently the Internet. The Internet is the most effective way to engage the general public in research progress, open research questions and present results of research. Moreover, scholars and interested laymen can be informed about recent publications and excavation work, such as the research of our institute in Egypt and Sudan. In the autumn of 2013, we launched official Facebook and YouTube pages, aimed at the presentation of the results of the work of the Czech Institute of Egyptology, Faculty of Arts, Charles University, in Egypt and Sudan and its activities in the Czech media and media abroad.

You can find our Facebook page at the address https://www.facebook.com/egyptologieffcuni/ with the title Český egyptologický ústav FF UK. As many of the Egyptological institutes on Facebook, we have opted for the title in the original language of the institution. The web page informs the public about the activities of the institute and its staff, and it features links to news and interviews in Czech and other media around the world. The site has now more than 2,400 followers. Most of them are from the Czech Republic, but its visitors come from many other countries around the world. Photo albums on our web page include exclusive photographs from the current excavations in Egypt and Sudan and latest Egyptological events in Prague or other cities, organized or co-organized by the Czech Institute of Egyptology. If you would like to have current and up-to-date information about the institute, then please like us on Facebook.

The YouTube channel is at the address https://www.youtube.com/user/egyptologieffcuni. It follows the example of the Egypt Exploration Society. The channel includes historical footage and recent videos from the Czech excavations in Egypt and Sudan; there are also lectures for public and scholarly audiences. The page has now more than 400 followers and our videos have now had more than 100,000 views. The earliest video is the unique footage from the 1960s Czechoslovak expedition to Nubia with archaeological and epigraphical objectives at two Nubian concessions, now submerged under the water of High Aswan Dam. The then Czechoslovak Institute of Egyptology took part in the UNESCO campaign to save the monuments of Nubia.

Cooperation with movie makers was resumed in the 1980s, when a Czechoslovak crew lead by Jan Boněk (1945–2016) made a documentary about the work of the Czech Institute of Egyptology at Abusir for British Channel Four, aired for the first time in 1988. Jan Boněk then cooperated with Czech Egyptologists for more than twenty years and for many important discoveries, such as the opening of the sarcophagus of Iufaa and the excavation of the tomb of Neferinpu. Documentaries produced for Czech Television (Česká televize), e.g. “In the land of the pharaohs” and “New discoveries in ancient Egypt”, informed the Czech public about the current state of research of the ancient Egyptian civilization. In 2008, at the 50th anniversary of the founding of the Czech Institute of Egyptology, a montage of videos from 50 years of exploration was selected by him and is accessible on our YouTube channel. The selection also includes the opening of the undisturbed sarcophagus in the Saite-Persian tomb of Iufaa, in his shaft tomb at Abusir, which took place in 1998 and was covered by National Geographic. An 18-minute cut of the lifting of the sarcophagus is accessible on our YouTube channel. Furthermore, ten videos of talks are from the international conference “Profane Landscapes, Sacred Spaces”, which took place in Prague in June 2014, among them a presentation “Latest discoveries at Abusir South” by Miroslav Bárta, a lecture summing up the latest exploration of the Czech concession at Abusir.

Jan Boněk kindly bequeathed all material shot on the excavations at Abusir and on other Egyptian and Nubian sites to the Czech Institute of Egyptology. This unique material documents the archaeological work from the 1980s until 2010s and selected footage will also be posted on our YouTube channel.

Úvod > News > Czech Institute of Egyptology on the Internet