Results of research at Jebel Sabaloka now published in Antiquity 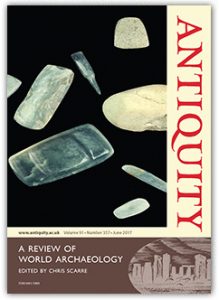 It has been eight years now since the expedition directed by the Czech Institute of Egyptology commenced its comprehensive archaeological and palaeoenvironmental research at Jebel Sabaloka near the Sixth Nile Cataract in central Sudan. The remains preserved in this area fall within the Mesolithic (ninth–sixth millennia BC), Neolithic (fifth–fourth millennia BC), and Late Meroitic through the Post-Medieval (Islamic) Period (fourth–sixteenth centuries AD).

The results of the hitherto research and long-term co-operation of the Czech Institute of Egyptology with the Institute of Archaeology of the Czech Academy of Sciences, Prague, and the Department of Informatics and Geoinformatics of the Faculty of Environment of the Jan Evangelista Purkyně University have now also found their place in Antiquity. At the beginning of June 2017 this prestigious journal published a paper entitled “From holes to huts: reconstructing an extinct type of architecture at the Sixth Nile Cataract” in which Ladislav Varadzin, Lenka Varadzinová and Jan Pacina focus on a so far only little known type of constructional relic that makes use of wooden skeletal frameworks in combination with vertical rock walls.

The authors devote primary attention to the remains of this type of architecture at the site of Sphinx (SBK.W-60) in the area of the Rocky Cities, in particular to the functional interpretation, possibilities of dating, and the first contextualization of the remains within the architecture of hunter-gatherer and pastoral societies in North Africa. The intention of the authors is to bring to the notice a significant category of sources to which archaeologists (at least in Northeast Africa) have paid, unfortunately, only a peripheral attention so far. 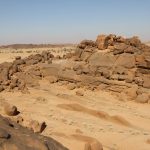 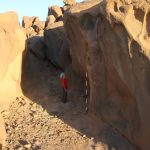 Fig. 2: View of the northern shelter with the second largest concentration of the artificial drilled holes at the site (marked by short sticks inserted during documentation) that probably constitute remains of light architecture (photo Ladislav Varadzin 2015)