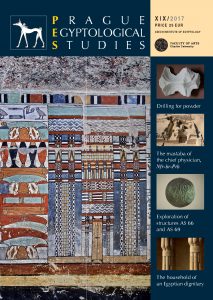 We are delighted to present the third English issue of Prague Egyptological Studies, a peer-reviewed journal that concentrates on studies in the history, archaeology, architecture, religion, language and art of the Third Millennium BC Egypt. In addition, we likewise include book reviews concerning recently published monographs in the above-mentioned fields.

In the current issue, several recently uncovered tombs and structures from the excavation works at Abusir are presented, including the mastabas of Kaisebi and Ptahwer (AS 76 and AS 76b), the tomb of Neferherptah (AS 65) and anonymous structures AS 66, AS 69 and AS 91 at Abusir South. Besides these, we are pleased to include a report on the 2016 season conducted at the pyramid complex of King Djedkare at South Saqqara.

Our journal also aims to provide more theoretical studies and in this particular edition, it focuses on a few select questions concerning the archaeology, architecture and social enquiries of the Third Millennium BC. These include a new interpretation of enigmatic limestone fragments from the Memphite necropolis, an analysis of an Old Kingdom household based on research of reliefs in the mastaba of Vizier Ptahshepses from Abusir and a short study of decorated blocks uncovered in the tomb of Rashepses at Saqqara. Additionally, one paper is devoted to the analysis and significance of satellite imagery during the survey and interpretation of the sun temples of Abu Ghurab.

Furthermore, the presented issue also commemorates the 100th anniversary of the birth of Professor Zbyněk Žába, one of the founders of the Czech Institute of Egyptology, and with regret presents eulogies dedicated to the memory of the recently deceased Egyptologist Ahmad El-Sawi.

The journal can be purchased via e-shop of the Faculty of Arts, Charles University, in hard copy or electronic version. All articles of the issue are also accessible in open access via the website of the journal.

Contents of the issue