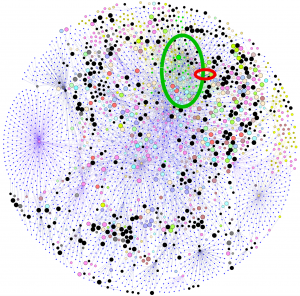 The Czech Institute of Egyptology of the Faculty of Arts of Charles University under the leadership of Prof. Miroslav Bárta has been developing long-term research into the dynamics of the development of complex societies based on the study of the anatomy of the internal dynamics of ancient Egyptian civilization. Since 2006, one of the fundamental activities in this field has been the creation and intensive filling of a database of officials buried at Abusir and the adjacent cemeteries at Saqqara, Giza and other selected sites led by Dr Veronika Dulíková. In view of the extent of the database, it was necessary to find methods that can cope with fragmentarily preserved information. This task has been addressed by Dr Radek Mařík of the Faculty of Electrical Engineering of Czech Technical University in Prague. Gradually, the Egyptology-cybernetic team succeeded to apply several cybernetics and artificial intelligence methods; together, they acquired a grant from the Czech Science Foundation GACR for a project named “Complex network methods applied to ancient Egypt data in the Old Kingdom (2700–2180 BC)”. The main objective of the project is to develop a new approach to the analysis and interpretation of data available from the age of the pyramid builders and the use of semi-automatic methods in its processing. This has defined cyber-Egyptology as a new branch of science.

The assumption that ancient Egyptian civilization developed non-linearly in accordance with the punctuated equilibria theory has been confirmed by excavations carried out by Czech Egyptologists. Fundamental changes in the development of society took place in steps, similarly as for instance during the so-called Velvet Revolution or the Arab Spring. An extensive and worldwide unique database is being put together in order to cast more light on the details of the mechanism behind these processes; at present, it contains information about almost 5,000 officials, their titles and family relationships. First of all, however, it was necessary to unify data gathered from heterogeneous sources. The techniques of artificial intelligence and complex network analysis have been used to process the records. Procedures operating with uncertainty and logic have been used to reconstruct families and family relationships, nepotism and the real activity of so-called interest groups. The analysis of the heredity of offices and functions is based on relatively simple but efficient network techniques and on the so-called data mining method. Various possibilities of visualization of family trees have been implemented as well. The application of the Hidden Markov model theory has revealed details of the transformation of the administration of the land in the Fifth Dynasty period. Information theory has helped to detect strategic titles and powerful dignitaries who gained considerable influence.

Dr Radek Mařík says about the demandingness of creating so extensive programme: “We had to overcome not only considerable communication barriers but also differences in our approaches to the scientific work and publication activity. What we do is not an attempt to gain an interpretation of Egyptological data using known methods but the development of modified techniques based on the principles of cybernetics, artificial intelligence and complex network analysis, which can cope with a limited amount of complex structures with uncertainties and missing entries.”

Dr Veronika Dulíková adds the following on the research: “Together, we are learning about ancient Egypt and its legacy concerning the future of our society, because the mechanisms that worked at that time remain valid also in modern times. The cooperation between Egyptology and cybernetics has gained response in this country and abroad; it shows that major discoveries do not emerge only from the sand.”

According to Prof. Miroslav Bárta, the head of the Czech research in Egypt and a prominent theoretician of the development of complex societies, this line of research is among the most promising worldwide in the social sciences at present. “Our institute has been theoretically and practically involved in research into ancient Egyptian civilization and the internal processes that led to its rise and repeated collapses as well as to its resilience and adaptation to external transformations of the natural environment. We use this data and compare it with characteristic trends of other civilizations, and it turns out that apart from all sorts of variables, there are many regularities that are general and remain valid to this day. This line of research, determining for our institute, has become a subject of interest not only within the social sciences but also in the security services, as demonstrates a workshop recently organized for the armed and security forces at Potomac Institute in Washington, D.C.”

The research is the subject of a chapter in a book under preparation, which will deal with the possibilities of application of the basic principles of cybernetics to a non-traditional domain such as Egyptology.

The graph depicts a grouping of people who lived during the Fifth Dynasty based on professional relationships. Small blue dots represent persons, green ones viziers and yellow ones members of the royal family. Larger coloured dots represent the titles, including for example priests (violet), viziers (dark green), administrative officials or judges (light blue), etc. A green ellipse marks the group of viziers and a red oval the high-ranking dignitary Ty, whom the Fruchterman-Reingold method has placed in a close proximity of the top officials. The used method of distribution of the network’s nodes places officials with similar sets of titles and titles held by the same officials close to each other (informally, the layout process can be described as the shaking of a network whose nodes are connected by springs).