The Egyptian archeological expedition under the direction of Dr. Mohamed Megahed at south Saqqara succeeded in finding a unique tomb of the dignitary Khuwy who lived at the end of the 5th Dynasty of the Old Kingdom. The tomb was found during the excavation and documentation activities of the area.

The tomb consists of a superstructure with an L-shaped offering chamber, which was once decorated with reliefs. Only the bottom part of this decoration is preserved due to re-use of its white limestone blocks in later times.

In the north wall of the tomb the mission found the entrance to a unique substructure, which is for the first time clearly inspired by the design of the substructures of the royal pyramids of the 5th Dynasty. This part of the tomb started with a descending corridor, which leads to a vestibule. An entrance in its southern wall gives access to a decorated antechamber. Its decoration represents the tomb owner sitting in front of the offering table on the south and north walls. Moreover, an offering list was depicted on the east wall and the palace-façade on the west wall.

Through two entrances in the west wall of the antechamber the mission succeeded to enter a second room, which was the burial chamber itself and which had remained undecorated. It seems that the space of the burial chamber was almost completely filled with a limestone sarcophagus, which was found entirely destroyed by ancient tomb robbers. However, the mission discovered remains of the body of Khuwy, which shows clear traces of mummification.

An entrance in the south wall of the decorated antechamber leads further to a small room used most likely as a storeroom. The mission found this room filled with debris but contained almost no finds.

The discovery of this tomb stresses the importance of Djedkare’s era, and the end of the 5th Dynasty in general. In his pyramid complex, the mission in cooperation with an international team of Egyptologists also succeeded in uncovering an ancient Egyptian queen who lived during the late 5th Dynasty.

The mission found the name of queen Setibhor, who was not known before from ancient sources, engraved on a column in the south part of the until now anonymous pyramid complex. The complex is located by the pyramid of king Djedkare in south Saqqara and the identity of its owner was a puzzle that Egyptologists have been trying to solve for decades.

The name and titles of the owner of this unique monument was found on the column made of red granite in the newly uncovered portico of the queen’s complex. The inscription was carved in sunken relief in a rectangle on the shaft of the column, and it reads: ‘The one who sees Horus and Seth, the great one of the hetes sceptre, the great of praise, king’s wife, his beloved Setibhor’.

The column together with limestone blocks and fragments bearing relief decoration from the temple of the queen was found during exploration and documentation work in the pyramid complex of king Djedkare.

The pyramid complex of queen Setibhor represents one of the earliest pyramids built in south Saqqara at the end of the 5th Dynasty, and it is the largest pyramid complex built for a queen during the Old Kingdom. Moreover, her funerary temple incorporated architectural elements and chambers that were otherwise reserved for the kings of the Old Kingdom only.

The large size of the pyramid complex of queen Setibhor and her title of queen’s wife indicate perhaps her direct intervention in helping her husband, king Djedkare, ascend the throne of Egypt at the end of the 5th Dynasty. It seems that Djedkare wanted to honor his wife by constructing her a huge pyramid complex, with many unusual features, including palmiform granite columns, which constitute an architectural element thus far known only in the pyramid complexes of kings and not used in the temples of the queens during the Old Kingdom period.

The mission carries on the archaeological work in the pyramid complexes of king Djedkare and his wife Setibhor and its associated cemeteries, hoping to obtain more information on the end of the 5th Dynasty and the beginning of the 6th Dynasty. This is a period that witnessed a radical transformation in ancient Egyptian ideology and religious beliefs, such as the appearance of the Pyramid Texts for the first time inside the pyramid of king Unas, the successor of Djedkare, and also the end of constructing sun temples that were built by all the 5th Dynasty predecessors of Djedkare. Fig. 2 Entrance to the substructure of Khuwy’s tomb in the north wall of his tomb (photo Hana Vymazalová) Fig. 3 Decorated antechamber in the substructure of Khuwy’s tomb, view to the east and south walls (photo Hana Vymazalová) 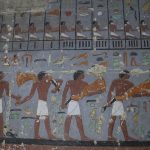 Fig. 6 Detail of the decoration of the east wall of the antechamber (photo Hana Vymazalová) Fig. 7 Detail of the decoration of the east wall of the antechamber (photo Mohamed Megahed) Fig. 8 Entrance to the storeroom in the south wall of the antechamber with part of its fill (foto Mohamed Megahed) Fig. 9 Khuwy’s burial chamber with a small part of his sarcophagus in the south-east corner (photo Hana Vymazalová) Fig. 10 South part of the queen’s pyramid complex, which is situated by the north side of king Djedkare’s funerary temple. The preserved parts of the pavement show the outlines of rooms and corridors (photo Peter Jánosi) Fig. 12 Columns of red granite were used in monuments of Egyptian kings but they are very unusual in a queen’s temple (photo Mohamed Megahed) Fig. 13 The red granite column provided the answer to the question who was the owner of this pyramid complex at south Saqqara (photo Mohamed Megahed) 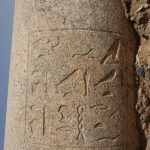 Fig. 15 One of the limestone blocks with relief decoration from the temple of queen Setibhor (photo Mohamed Megahed) 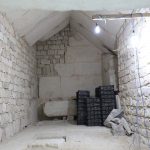