Latest issue of the journal Prague Egyptological Studies (XXIII/2019) has been published! 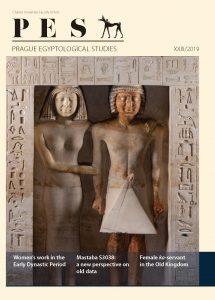 The year 2019 was important for the Czech Institute of Egyptology, Faculty of Arts, Charles University. It celebrated the 100th anniversary of the beginning of Egyptological lectures in Czech language at the Czech part of the university in Prague. In addition, six decades from the establishment of the Cairo department of the Czech (former Czechoslovak) Institute of Egyptology are herein commemorated as well. On the occasion of the first anniversary, a short article summarising the Czech Egyptological century was prepared for this issue. This introductory text is followed by archaeological reports on the pyramid complex of King Djedkare and the nearby tomb of the official, Khuwy, at South Saqqara. The locality of Abusir is expounded on with a report on the excavations of the mastaba of Nyankhseshat (AS 104). The final report is devoted to the exploration of Wahty’s tomb and adjacent structures at North Saqqara. The studies herein focus on various aspects of the Early Dynastic and Old Kingdom society, dealing with the role of women, mastaba S3038, copper tools and a re-consideration of tomb dating.

We are very delighted that in this special year we have prepared a new layout of the journal Prague Egyptological Studies. In this concern, many thanks go to the editorial and graphic teams, who spent hours in discussions and working on the re-design.

The journal is available in printed and e-versions in the e-shop of the Faculty of Arts, Charles University and the bookshop Karolinum.