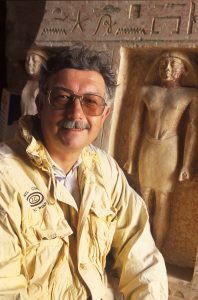 It is with our deepest sorrow that we announce that today, on the 24th of June, our dear colleague, Professor Břetislav Vachala, passed away.

He was not only a great scholar of ancient Egypt, its language, literature and heritage, but above all a marvellous man and a good friend to us all, who was always able to inspire his colleagues to joint work, his pupils to a deeper involvement in their studies, and the general public to an interest in ancient Egypt.

His memory is appropriately expressed by the words of a famous ancient Egyptian instruction:

“Those learned scribes from ancient times,

who foretold the future!

Their names are eternal,

although they have passed away.”

(The Immortality of Writers)

On behalf of the Czech Institute of Egyptology, CU FA

Břetislav Vachala was born (rather by happenstance) in Jaroměř, but he spent his childhood and youth in Hradec Králové and for his entire life remained a local patriot of Hradec. In his youth, he was an active volleyball player. In his early childhood, under the influence of the Czechoslovak participation at the international UNESCO campaign to salvage the monuments of Nubia at that time, he became interested in Egyptology and ancient Egypt, and when he was nine years old, he began exchanging letters with the then director of the Czechoslovak Institute of Egyptology of the Faculty of Arts at the Charles University, Professor Zbyněk Žába.

In the years 1970-1975 he studied Egyptology and Arabic at the Faculty of Arts of the Charles University, and after a nine-months fellowship in Egypt, he joined the Czech (then Czechoslovak) Institute of Egyptology, CU FA in 1976. He continued working here until his death, with the exception of the years 1993-1997, when he held the position of ambassador of the Czech Republic to Egypt. Between the years 2000-2005 he was the director of the Czech Institute of Egyptology, CU FA.

He also frequently participated at the excavations at the archaeological site of Abusir and the publication of their results. For example, in the reliefs of the tomb of the judge Inti, he identified the oldest love song. He also published a number of ancient Egyptian objects in Czech and foreign museums and collections.

He played an important role in the education of new generations of Egyptologists and experts in related professions at the Charles University in Prague and at the Masaryk University in Brno. He actively participated in a number of international Egyptological and Nubiological congresses and conferences, and he was also a member of the editorial boards of several journals, lately above all Dějiny a současnost, where he also published. His lifelong interests included philately, focussing especially on stamps from Egypt and stamps with ancient Egyptian motifs from the entire world.

He was known and well-liked among his colleagues and students, but also among the colleagues and co-workers of the Czech Expedition in Egypt, for his happy and optimistic nature, which even his long, severe illness could not cloud.