Living at the Margins of Assyria 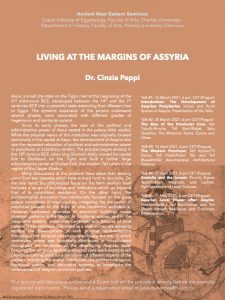 Dear friends and colleagues, we would like to invite you to a new series of virtual talks to be presented by Cinzia Pappi entitled “Living at the Margins of Assyria”. The series is organised by the Czech Institute of Egyptology, Charles University and the Department of History, Palacký University Olomouc and you can find both a schedule and an abstract below. Please, send an email to jana.mynarova@ff.cuni.cz if you want to register for the series.
Schedule:
Abstract:
Assur, a small city-state on the Tigris river at the beginning of the 2nd millennium BCE, developed between the 14th and the 7th centuries BCE into a powerful state extending from Western Iran to Egypt. The dynamic expansion of the empire underwent several phases, each associated with different grades of hegemonic and territorial control.
Since its early phases, the seat of the political and administrative power of Assur rested in the palace (Akk. ekallu). While the physical nexus of this institution was originally located exclusively in the capital at Assur, the development of Assyria also saw the repeated relocation of political and administrative power to peripheral or subsidiary centers. The process began already in the 18th century BCE, when king Shamshi-Addu moved his capital first to Ekallatum on the Tigris and built a further large administrative center at Shubat-Enlil, the modern Tell Leilan in the region of the Upper Khabur. After the collapse of the political power of Shamshi-Addu and Ishme-Dagan, the Assyrian kings returned their political seat to Assur. With the renewed conquests of the 14th century BCE, the Middle Assyrian Adad-Nirari I again began to re-organize the territories of Assyria into provinces, and new palaces were again developed in the provincial centers such as Kilizu, the modern Qasr Shemamok, and Taidu on the Upper Khabur.
By the beginning of the first millennium, even as Assyria began slowly to re-integrate the provinces lost at the end of the Bronze Age, the memory of this institutional presence formed an integral part of royal ideology and propaganda. Provincial palaces, reproducing architectural and decorative features of elite residencies, but marked by royal possession inscriptions as belonging to the royal estate, became a functional representation of Assyrian state administration at least until the end of the 7th century BCE. Even after the collapse of the central state, they seem to persist in the territories as productive centers, serving in some cases as economic hubs in small scale markets.
Many discussions of the problem have taken their starting point from two datasets which have proved hard to reconcile. On the one hand, the philological focus on the term ekallum itself includes a range of buildings and institutions which go beyond that of a centralized residence. On the other hand, the archaeological discussion has traditionally focused on the great palace complexes of royal capitals, relegating the discussion of provincial palaces to the topic of elite residential architecture. However, excavated examples of provincial buildings reveal common patterns in the layout, in functional spaces, and in the decorative systems, sometimes combined with features of local culture. These seminars, conceived as a wide survey, are aimed to explore the development of such political representations throughout the imperial periphery, specifically, the way in which centralized power was historically distributed or recapitulated throughout the territories of the developing Assyrian state. Focusing first on geographically selected data, each example will provide a starting point for a discussion of different aspects of the palaces, including the spatial distribution, the architectural layout, functional spaces, and decorative systems, to investigate the development of Assyrian provincial policies. 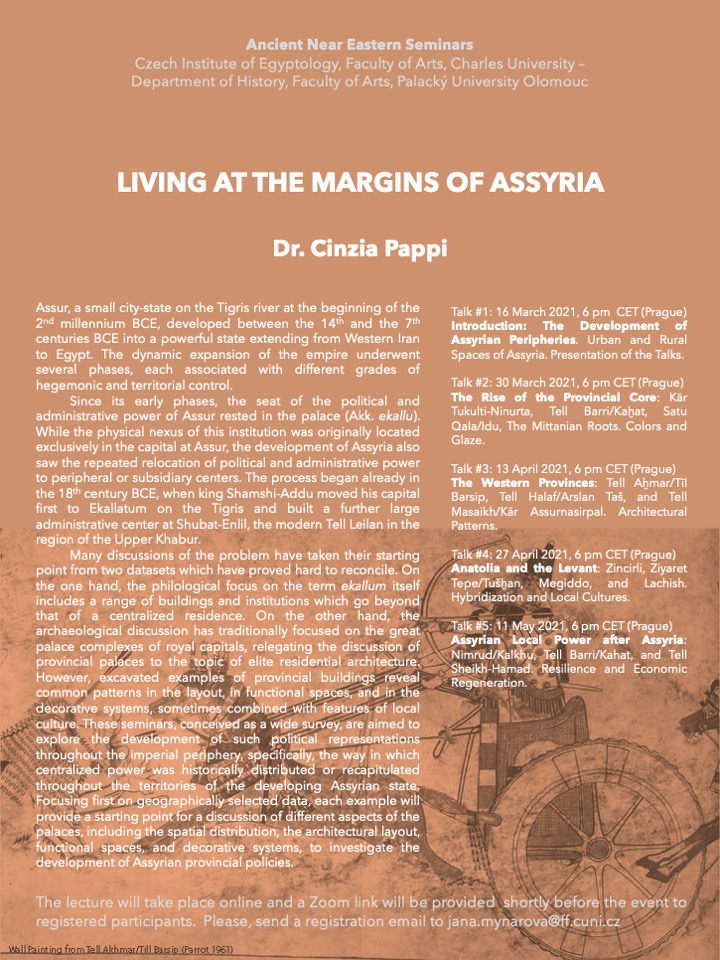 Úvod > News > Living at the Margins of Assyria