The largest embalming cache ever found in Egypt unearthed at Abusir 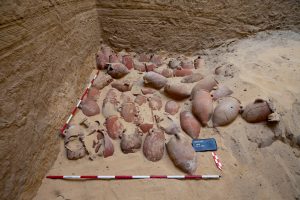 Since more than three decades the Czech Institute of Egyptology has been exploring a cemetery dating to late Dynasty 26 or early Dynasty 27 (second half of the 6th century B.C.E.), In a group of large shaft tombs situated in the western part of the ancient Egyptian necropolis at Abusir a a unique embalming cache has been unearthed. With altogether 370 large pottery storage jars and a number of smaller artefacts it is probably the largest complex and principally undisturbed find of its kind originating from Ancient Egypt.

All those vessels, containing remnants and residues of various materials and utensils that had originally been used during the mummification process, were found in a huge shaft measuring 5.3 by 5.3 metres, and going more than 14 meters deep, adjacent to a large, still unexcavated burial structure. Here, the vessels were subsequently laid in altogether 14 clusters, situated at depths reaching from 4 to 12 metres and adjoining the sides of the shaft in a spiral-like pattern. The numbers of vessels stored in each of those clusters varied considerably from 7 to 52 specimens.

In the uppermost group of the vessels, moreover, four inscribed canopic jars made of limestone were found, all of them empty and clearly unused. According to the texts inscribed on them, the canopic jars belonged to a certain Wahibre-mery-Neith, son of the Lady Irturu.

Director of the mission to Abusir, Prof. Miroslav Bárta notes that “The season of 2021 was part of a long term project aiming at excavation and interpretation of monuments dating to a period when Ancient Egyptian society was looking for new means how to maintain their unique identity which was challenged by the Greek, the Persian and the Nubian armies”. The shaft tombs of Abusir, built in a similar fashion like the famous burial of Djoser, founder of the Old Kingdom, played a major role in a unique way of cultural expression by the Egyptian elites of the period.”

“Although a number of dignitaries of this name are known from this period, none of them can be identified as the owner of these canopic jars, as different mothers are attested for all of them. Judging from the size of the embalming deposit and, mainly, from the dimensions and arrangement of the nearby tomb, the owner of the tomb (and of the deposit) must have belonged to the highest dignitaries of his time, together with his closest neighbours in the cemetery – the famous admiral Udjahorresnet and general Menekhibnekau,” Prof. Ladislav Bareš, one of the leading experts on the period, said.

In 2022, the excavation of this burial structure should continue by exploring the burial structure situated at the bottom of a huge central shaft. At the same time, analyses of the vessels and their contexts by means of modern scientific methods is under preparation.

The excavation of the Czech Institute of Egyptology, Faculty of Arts, Charles University are funded from the programmes of the Charles University Progres and Cooperatio, the project KREAS (“OPVVV”), and the dotation VEG of the Ministry of Education, Youth and Sports. 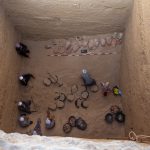 A cluster of some of more than 370 large vessels discovered within the embalming deposit of a certain Wahibre-mery-Neith. Author: Petr Košárek, © archives of the Czech Institute of Egyptology. 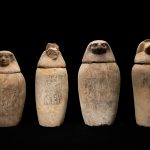 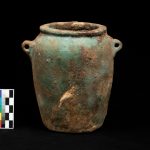 A heart-shaped vessel from the embalming deposit of Wahibre-mery-Neith. Author: Petr Košárek, © archives of the Czech Institute of Egyptology.