In the spring season of 2022, the archaeological mission of the Czech institute of Egyptology, Faculty of Arts, Charles University discovered the burial of an ancient Egyptian dignitary named Wahibre-mery-Neith. The Abusir tomb can be most probably dated to late 26th Dynasty or early 27th Dynasty (early fifth century BC). The most important title held by Wahibre-mery-Neith, mentioned in his burial shaft, is that of “Commander of Foreign Mercenaries”. This man thus supervised and commanded mercenaries coming from the Aegean islands and Asia Minor in the age of the first true globalisation of the ancient world.

In 2021, the Czech mission excavated the largest embalming cache ever found in Egypt that belonged to the owner of the newly discovered tomb. The cache held more than 370 pottery storage jars containing materials that had originally been used during the mummification of Wahibre-mery-Neith.  In the spring archaeological season of 2022, the exploration of the shaft tomb of Wahibre-mery-Neith continued by excavation of its huge main shaft (measuring approximately 14×14 metres). At a depth of about 6 metres below ground level, the main shaft was divided into several parts, separated by “bridges” made of the original bedrock. In about the centre of the main shaft, another smaller shaft used for the burial was dug into the bedrock. It was orientated east-west and measured approximately 6.5 by 3.3 metres. The layout of this shaft tomb has no exact parallel in ancient Egypt, although it partly resembles the structure of the nearby tomb of Udjahorresnet and the so-called Campbell’s tomb in Giza.

At the bottom of this central burial shaft, at a depth of about 16 metres, a double sarcophagus was discovered, partly damaged by ancient looters. This finding proved that, unlike the embalming deposit, the tomb of Wahibre-mery-Neith has been robbed in late antiquity, most probably around 4th-5th century AD, as witnessed by two early Coptic vessels found forgotten in the main shaft.

The double sarcophagus was situated directly on a filling of sand at the bottom of the burial shaft. Within the shaft, at the western and eastern sides of the sarcophagus, rather sparse burial equipment has originally been placed. At the east, several items were excavated intact and in situ: two wooden boxes with altogether 402 faience shabtis (servant figures who were to undertake labour instead of the owner in the afterlife), two uninscribed alabaster canopic jars, a faience model of an offering table, ten model cups and a limestone ostracon inscribed with religious texts written in black ink and hieratic script. Due to the limited space, the author of the text decided to cover the ostracon with brief excerpts from the Book of the Dead spells that also formed parts of the ritual of transfiguration and thus guarantying an undisturbed afterlife existence of the owner. The space inside the inner basalt sarcophagus was found almost completely empty. Only a finely carved but uninscribed heart scarab and an amulet in a shape of a headrest were found in the otherwise empty sarcophagus.

Although the archaeological excavation of the burial of Wahibre-mery-Neith did not offer many excavated objects or an elaborate funerary equipment, it is unique and important, as it offers new insights into the troubled period of the beginning of Persian dominion in Egypt. In combination with outcomes of the ongoing research on the owner’s embalming deposit, a picture of Wahibre-mery-Neith’s life, family background and professional career starts to emerge. He most probably died very unexpectedly, when his tomb and burial equipment were still unfinished. Thus, both the layout of his tomb and its contents provide very valuable information on the importance and meaning of individual parts of the burial equipment and tomb decoration. It also shows us how the ancient Egyptian adapted the material culture of their religious beliefs under difficult circumstances and in times of crisis when the indigenous character of ancient Egyptian civilisation started to vanish. 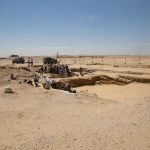 Fig_1: Archaeological works before the excavation of the main shaft of Wahibre-mery-Neith’s tomb. Photo: Petr Košárek; archives of the Czech Institute of Egyptology, Charles University. Fig_2: After revealing the inner structure of the tomb in the centre of the main shaft. Photo: Petr Košárek; archives of the Czech Institute of Egyptology, Charles University. 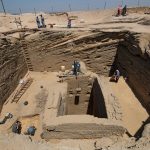 Fig_4: View of the huge Whaibre-mery-Neith’s outer sarcophagus at the bottom of the burial shaft. Photo: Petr Košárek; archives of the Czech Institute of Egyptology, Charles University. Fig_5: View of the partly destroyed inner sarcophagus decorated with the Book of the Dead chapter 72. Photo: Petr Košárek; archives of the Czech Institute of Egyptology, Charles University. Fig_6: Two canopic jars and other object made of Egyptian alabaster discovered by the Czech archaeological mission in the tomb of Wahibre-mery-Neith in Abusir. Photo: Petr Košárek; archives of the Czech Institute of Egyptology, Charles University. Fig_9: Archaeological exploration of the shaft tomb of Wahibre-mery-Neith with the Abusir pyramids in the background. Photo: Petr Košárek; archives of the Czech Institute of Egyptology, Charles University. 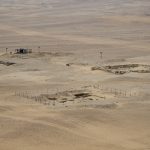