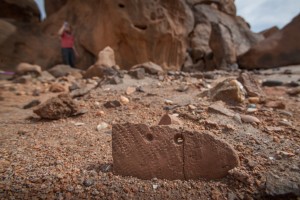 As distinct from Europe and the Near East, pottery in Northeast Africa was produced already byMesolithic hunter-gatherers. Archaeologists mostly dated the earliest specimens in central Sudanto the seventh millennium BC. The research conducted so far at Jebel Sabaloka has provided findsalready from the second half of the eighth millennium. It is likely that pottery had been presentthere earlier as it was characterised by rather high quality. (photo Petr Pokorný)