The Temple of Hatshepsut at Deir el-Bahari: a Truly Unique Monument

The monument usually termed the temple of Hatshepsut at Deir el-Bahari is the main part of a larger architectural and ideological complex of Djeser-djeseru. As a Mansion of Millions of Years it had twofold purpose, ingeniously intertwined in one space. Firstly, it belonged to the double temple complex of Amun-Ra, stretched along the world axis from Karnak to Western Thebes (his eastern and western horizons, respectively). At the same moment the temple formed part of the mortuary complex of Hatshepsut: her tomb KV 20 and Djeser-djeseru are two complementary structures which, although seemingly separated from each other, were intended to play jointly a role in the female pharaoh’s (and her father’s) eternal life.
The temple of Deir el-Bahari, carefully designed and built during some fifteen years of Hatshepsut’s formal rule, is a miracle of ancient Egyptian architecture and art. Its architectural setting and details, as well as its statuary program, relief decoration and texts, are truly unparalleled. Its message reveals most important secrets of the ideology of kingship and royal eschatology. 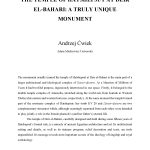