The tomb of priest Hetepi was excavated in the year 2000, and represents the oldest of the tombs hitherto discovered on the Czech archaeological concession. It dates to the beginning of the Fourth Dynasty (ca. 2600 B.C.) and is located only a few hundred meters to the north of the ancient Step Pyramid complex of King Djoser.

The building of the stone pyramid complex of King Djoser is one of the highest achievements of the ancient Egyptians. The architect who stood at its creation was the high priest of Heliopolis and king’s builder Imhotep. Already in ancient times, several hundred years after the completion of the monument, numerous people visited the site in order to see it, and left behind them inscriptions expressing their admiration of the beauty and monumentality of the place.

Djoser’s complex symbolized an eternal palace.This was the place where the deceased and deified king met with other gods of the Egyptian pantheon. The divine nature of the ruler is indicated also by the form of one of his names, Netjerikhet, Divine of Body. The complex itself was called The refreshment of gods. Numerous religious festivals were celebrated here, and the highest officials and priests of the country may even have gathered here in order to honour the deceased ruler. But this unique creation of the human genius also remains a great mystery. It consists of a number of many independent and separate architectural elements that reflect the consolidation of the political and economic situation in Egypt. At the same time they served as symbolical places for the celebration of religious festivals; among them were buildings that commemorated the unification of Upper and Lower Egypt, a temple dedicated to the mortuary cult of the king, an altar on which offerings were presented to the sun god, and many others. The complex is so vast that an extensive area within it still remains unexplored.

The final resting place of the king was constructed in the form of a step pyramid, with the burial chamber hidden deep in its substructure. The burial chamber itself was surrounded by a complex system of decorated rooms and corridors, which are now considered to represent a model of Djoser’s earthly palace, built as his dwelling in the other world.

Our knowledge of the time of King Djoser remains fragmentary. Over 4500 years have passed since then, and most of the monuments were destroyed and disappeared without trace. We do not even know the site of the final resting place of the ingenious builder of the Step Pyramid, Djoser’s high official, architect, and later also patron of physicians, Imhotep, whose fame and for ages recounted wisdom have survived the fall of ancient Egypt to last virtually until today.

Among the latest discoveries from the time near that of the builder of the first pyramid, the tomb of Hetepi dating ca to 2600 B.C., clearly stands out, revealing the way Hetepi imagined and secured his afterlife.

The tomb of Hetepi began to emerge out of the sand of the Egyptian desert already during the first hours of the excavation works. It turned out that the crowns of its walls were hidden only several centimeters under the desert surface. Shortly after the excavation began, it became clear that already in terms of its size, the tomb is exceptional and belongs to the largest contemporary buildings of its kind (it covered the surface of 1000 m2). The architecture of this mastaba-type tomb was at places preserved up to the height of 2,5 m, i.e. almost to its original height, which may have reached 3 m. In less than a week of archaeological excavations, it was possible to not only unearth almost the entire rectangular ground plan of the tomb, which was built of mud brick and limestone debris (its longer side measured almost 50 m), but also its eastern face and even its cultic chapel, where the offering rituals for the spirit of the deceased Hetepi were performed. 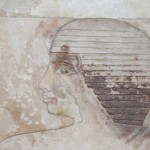 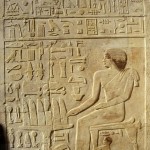 The discovery of this chapel, which was built of fine white limestone blocks, surprised the excavators in many ways: its eastern face was covered with a unique relief decoration. The tomb of Hetepi thus belongs to the oldest decorated tombs in Egypt and confirms the hypothesis that tomb decoration had first concentrated in the entrance area and only later was transferred to the interior chapel walls. The northern part of the face of the chapel shows Hetepi seated at an offering table covered with sliced bread. More offerings are depicted around the table; these were to be regularly offered to the deceased in his chapel. The space above his head includes his titles, inscribed in two lines, which mediate to us the character of this man, who lived four thousand years ago. In order to understand these titles, it was first necessary to spend several months working on their translation. The process was, moreover, complicated by the fact that we are dealing with one of the very ancient texts which abound in abbreviations. In the very beginning, it was necessary to carefully choose which of the several possible interpretations of the individual hieroglyphic signs and their combinations was correct. Only then we could proceed to explain the individual titles, some of which remain without parallels. Among Hetepi’s main titles, we find the king’s herold with a strong voice, great one of the ten(s) of Upper (southern) Egypt and overseer of the slaughterhouse. Further, Hetepi exercised several priestly functions and he was also an iry ikhet nesut, i.e. property custodian of the king. This title indicates that Hetepi belonged to the highest official elite, which we could perhaps compare to the suite of the medieval king. These officials worked not just as personal servants of the king, who watched over his hygiene, eating and dressing, but they also formed the backbone of the nascent ancient Egyptian state.

To the south of the entrance to the chapel, the figure of Hetepi was merely traced in black ink. Apparently no time remained to finish the decoration, and thus a simple rough artist’s sketch was preserved, including the ancillary numbers that give the proportions of the individual parts of the human body. Hetepi is represented standing, leaning on his official staff, the attribute of his power and authority. In front of him, we see two of his sons. The chapel itself was undecorated and three of its walls were cased with small limestone blocks, while the fourth, western wall, must have been already in antiquity destroyed by robbers. However, stone pivots were preserved in the limestone floor, attesting the existence of a double-winged door, which had once closed the western part of the chapel. In all likelihood, the door originally protected a niche, which may have contained a representation the striding figure of Hetepi.

The unique character of the chapel lies above all in the fact that it vividly illustrates the initial stages of the development of the ancient Egyptian conceptions of the existence in the other world. Together with the double-winged door, the niche represented a magical gate connecting the world of the living with that of the dead. Behind this frontier lay the other world, from which the spirit of Hetepi returned to partake in daily rituals.

The chapel was the place of the performance of funerary ceremonies, the aim of which was communication with the deceased and the equipment of his spirit with symbolical offerings. The building of a tomb was one of the basic prerogatives of the afterlife existence of the ancient Egyptians. Thus, one of the earliest preserved instructions from the time of the Old Kingdom says: Build yourself a house in the necropolis and embellish your place in the west. Remember that death is nothing for us, remember that we value life; but the house of death is precisely for life!

Hetepi’s burial chamber was hidden at the bottom of a deep shaft and was accessed from the north by a unique winding stairway. At the bottom of the shaft a short, almost two meters high corridor led south to the burial chamber, which was, however, plundered already in antiquity. Only several fragments of a wooden coffin remain from the original burial, together with pieces of funerary equipment, which was also considered indispensible for an undisturbed afterlife existence. Based on parallel examples, we know that at this time funerary equipment consisted of food and drinks for the spirit of the tomb owner, of stone and pottery vessels, boxes, clothes, accessories and other items to which the Egyptians were well accustomed from their daily lives. The deceased thus had at his disposal everything that he could potentially use in his new, eternal life.

Currently, intensive excavation works are in progress around the tomb of Hetepi and further important discoveries are expected in near future. And who knows, perhaps the nearby sand hides even the legendary tomb of Imhotep, the discovery of which was and still remains a dream of several generations of Egyptologists?