The site of Usli is located on the left bank of the Nile, about 40 km southwest of the Fourth Cataract. Despite its Old Nubian name, it was only discovered recently. In 2000, a Polish team lead by Bogdan Żurawski noted sandstone blocks and parts of columns that might have come from an as yet unknown monumental building. He identified Usli tentatively with ancient Tare where a temple of the goddess Bastet was located according to the stelae of the Napatan kings Harsiyotef and Nastasen from the fourth century BC.

Subsequently, the archaeological excavation by the Czech expedition uncovered at the site remnants of the significantly damaged architecture of a stone temple from the Napatan Period (c. 900–300 BC). There aresome indications, however, that the origin of the building may date back to the time of the Egyptian viceroyalty (c. 1550–1069 BC). The temple with the size of 17.5 × at least 40 m consisted of an entrance pylon, an open columned court, a pronaos with four columns and a triple sanctuary. It was oriented perpendicularly to the flow of the Nile with an entrance from the southeast (i.e., from the desert). The walls of the temple once bore reliefs and hieroglyphic inscriptions, both painted in colour. However, only small fragments of them have survived. The find of a fragment of a granodiorite statue of a king clearly indicates a connection between the building and the royal power. Its extraordinary position is suggested also by small piecesof gold foil that might have originally covered reliefs or statues. The consecration of the temple remains unknown.

In cooperation with the Polish Academy of Sciences, a geophysical survey was carried out around the sandstone temple in 2013. On the area of 300 × 200 m, it discovered an extensive agglomeration of brick buildings with a centrally-located large rectangular structure and another temple with a triple sanctuary. The first sounding in the brick complex uncovered a part of a grand building whose walls were originally decorated with wall paintings.

Although it is not possible to state with certainty whether Usli is or is not Tare, it is already evident that the site is of considerable significance. The remains of monumental stone and brick architecture are supplemented by the evidence of occupation already in the mid-third millennium BC, a vast tumuli cemetery from the Meroitic (c. 300 BC – AD 350) and Post-Meroitic (c. AD 350–550) Periods, and several settlement hillocks from the Christian Period (c. AD 550–1500) recorded in a broader vicinity. These allow for a study of development of the micro-regionover a period of nearly five millennia. 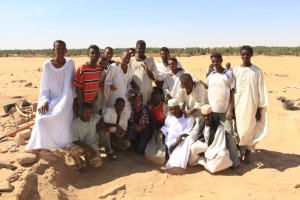 Discovery of a royal statue 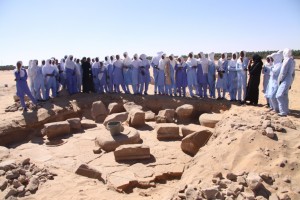 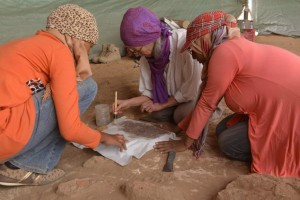 Cooperation with the Sudanese partners