Secondary Burials in the Tomb of Iufaa

Two small narrow burial chambers were located In the bottom part of the entrance shaft to Iufaa’s tomb. The one that was cut into the shaft’s western wall included the burial of the “divine father” Neko. Neko, who bore several other mostly priestly titles, was buried inside a richly decorated double wooden coffin. The walls of his burial chamber, reaching 2.9 m in length, 95 cm in width and only 70 cm in height, are cased with limestone panels decorated with a single line of hieroglyphic text. The relatively rich burial equipment consists of the usual set of four canopic jars, 403 ushabti, a wooden statue unfortunately almost completely damaged by humidity, and approximately 20 amulets placed directly into the wrappings of the mummy. Completely unique is the discovery of several wooden tablets placed directly into Neko’s coffin, which bear several chapters of the Book of the Dead, which was usually written on papyrus.

In the burial chamber in the northern wall of the shaft was found a largely damaged mummy of the “overseer of palaces” Gemenefherbak, buried originally inside a simple wooden coffin and accompanied by approximately 30 amulets of faience, various stone types and gilded copper sheet and over 300 roughly formed and badly preserved ushabti.

Other intact burials belonging to Iufaa’s sister Imakhetkheretresnet and to an older man (whose name has not been preserved) were found at the end of the underground corridor that flanked the southern side of Iufaa’s enclosure and was connected to the bottom of the western access shaft. At the sturdy wooden coffin of Iufaa’s sister lay canopic jars, 405 ushabti, amulets, and other items of the burial equipment. 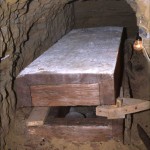 Another collection of four unfinished and unused canopic jars was discovered in the entrance part of the underground corridor. Maybe they were intended for Gemenefherbak, who was buried without them. The niched in the southern wall of the corridor contained over twenty large pottery storage jars, which have probably been used during mummification. According to conteporary beliefs, they thus had to be buried inside the same tomb.

Anthropological examination has unequivocally proven that all persons buried in the secondary areas of Iufaa’s tomb belong among his close relatives, although the precise nature of their relation to him cannot be determined (with the exception of the sister, whose origin is given in the inscription on her coffin). An anthropologically interesting discovery is the skeleton of Iufaa’s sister Imakhetkheretresnet, in whose sacrum were found traces of a relatively rare tumor.