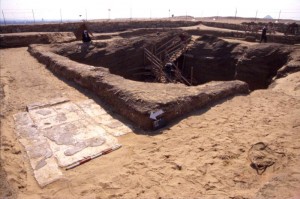 The exploration of this tomb was launched in the year 2002. Its superstructure, built in all likelihood only of blocks of highly valued white limestone, was destroyed already in antiquity during stone quarrying. Only a shallow foundation trench has been preserved from it, as well as several hundreds of large and small fragments of blocks decorated with texts and scenes in low and sunk relief. The exploration of the underground part of the tomb is now under preparation. It consists of a large main shaft and two smaller shafts (to the south, respectively to the west), which probably gave access to the burial chamber. A further shaft located at the southwestern corner of the original enclosure contained a great number of large pottery storage jars used during mummification and indicates that the tomb owner has indeed been buried here.

According to the hitherto discovered objects, the tomb belonged to the king’s personal scribe Menekhibneko, who bore almost twenty other titles. This official has hitherto been known only thanks to his two statues, one of which is now located in France in Musée Dobrée in Nantes (cf. R. el-Sayed, Documents relatifs a Sais et ses divinités, Cairo 1975, pp. 160-165 and plates XXX-XXXI) and the other, still unpublished, in Berlin. a druhá, dosud nepublikovaná, v Berlíně.