The tomb of Iufaa represents in many respects the most fascinating structure of its kind hitherto explored at Abusir and perhaps in the entire pyramid field area. The superstructure is formed by a mud brick enclosure wall, which imitates the enclosure of the pyramid complex of Djoser in the nearby Saqqara. Moreover, massive limestone stelae reaching at least 3 meters in height stood originally in the middle of all four walls.

The main burial chamber, where the tomb owner was interred, was constructed at the bottom of a large shaft (13 x 13 m), about 22 meters deep. It is built of limestone blocks of various quality, perhaps reused from older structures. The inner walls are almost entirely covered by relief decoration, including religious texts (sections of the Pyramid Texts, the Book of the dead, the so-called Book of the Day and Night, Hymns to the Sun, etc.) and scenes. The lower part of the limestone outer sarcophagus (including the inner walls of the tub) is decorated in a similar way, and so are both parts of the inner basalt sarcophagus, which is so far totally unique among the known objects of its kind in its extent of decoration.

Despite the fact, that robbers were active in the main shaft (they stopped only about 1.5 m above the ceiling of the burial chamber), the tomb remained intact. In the narrow gap between the walls of the double sarcophagus and the chamber, the remains of a rich burial equipment were thus found. It contained a wooden chest with the canopic jars and 408 ushabti, another chest with faience and pottery vessels for sacred oils and ointments, amulets, the so-called magical bricks and also papyri, unfortunately irreversibly damaged by high moisture. Iufaa himself was inside the double sarcophagus contained also in a wooden coffin, and his mummy was covered by a beautiful net of beads. On the mummy, which lay contrary to the period tradition with the head to the east, golden cases protecting the ends of fingers and toes were found, as well as a number of amulets. 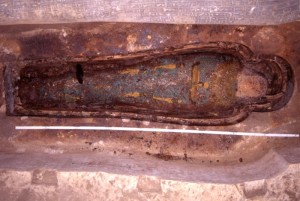 Access to the main burial chamber was secured by two smaller shafts (to the west, respectively to the south), which is also unattested for earlier structures of this kind. Unique is also the discovery of a complex of 16 chambers, sunk under the level of the surrounding terrain and originally roofed by mud brick vaults, located only several meters in front of the eastern facade of Iufaa’s enclosure. This complex, inside which among others several papyri inscribed in demotic were found, probably served the mortuary cult of Iufaa and perhaps also of his relatives, buried in this tomb (cf. below).

Iufaa himself carried only a single ancient title of the “overseer of palaces” which in his time probably reflected only a quite unimportant priestly function, and he moreover died quite young (35 years old at most). It thus so far remains a mystery, how he could have built for himself such a magnificent and beautifully decorated tomb, which belongs to the best examples of this type of architecture. Perhaps his family had assisted him. Besides his sister, however, we only know the name of his mother Ankhtisi – the father is mentioned nowhere in the tomb. Thanks to the extensive security structure, designed by Ing. M. Balik and realised in cooperation with the Supreme Council of Antiquities of the ARE by Arab workmen under the leadership of the foremen from the el-Kereti family, the underground spaces of the tomb are nowadays completely secured. Nowadays, the tomb is being prepared for opening for tourists.