New research and insights into the Palermo Stone 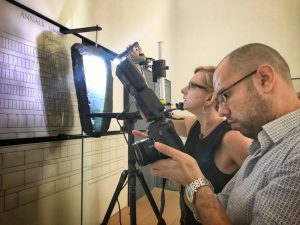 Recent investigation on the Palermo Stone carried out by some Egyptologists from the Charles University in Prague shed new light on this unique historical document from Ancient Egypt. For the first time the Palermo Stone has been investigated by means of an innovative technology of photo-documentation and reproduction (Reflectance Transformation Imaging, shortened as “RTI”) which allows us to read it completely, also in those parts, i.e., the “Verso”, which were not clearly and completely readable so far (fig. 1).

The Palermo Stone is the oldest royal annals ever known from Ancient Egypt. The annals are shaped as a stela inscribed on two faces (usually named “Recto” and “Verso”) with the histories of the first five dynasties of ancient Egypt – corresponding the so-called Early Dynastic Period and the Old Kingdom (c. 3200 BC – 2350 BC) –, as well as with a list of pre-dynastic kings, namely those kings ruling over Egypt before the country was unified around the end of the IV millennium BC (fig. 2). The stone, which is kept in the Museo archeologico regionale “Antonino Salinas”, is not a unique piece, for it seems to be a part of a larger corpus of inscriptions including 6 more fragments nowadays kept in the Egyptian Museum in Cairo (5 fragments) and in the Petrie Museum of Archaeology in the University College of London (1 fragment).

Research on the annals have been carried out by several authors in the last 150 years, namely since the very moment the stone was donated to the archaeological museum of Palermo in 1877 by a local nobleman, Ferdinando Gaudiano. In fact, however, many aspects of the history of the stone still remain to be clarified, such as, its provenance and date, or the fact that all the fragments so far known do really belong to the same stela/inscription. But first and foremost, it is the exact reading of the “verso” of the Palermo Stone – which is highly abraded and not completely readable – which creates difficulties and leaves room for further research. In fact, and quite surprisingly, the most complete translation of the stone was done in 1902 by the German scholar H. Schäfer, who also published the best (high resolution) picture of the two sides of the stone so far available (fig. 2).

In October 2017 a team of researchers from the Czech Institute of Egyptology (Jaromír Krejčí) and the Free University of Berlin (Mohamed Osman), led by Massimiliano Nuzzolo (also from the Czech Institute of Egyptology) has thus started a new investigation of the stone by means of a ground-breaking technology of photo-documentation and 3D reproduction which is called “Reflectance Transformation Imaging” (shortened as RTI). Simply put, RTI consists in a technique of imaging and interactively displaying objects under varying lighting conditions to reveal surface phenomena. A series of images is captured in a darkened room with the camera in a fixed position and the object lit from different angles (fig. 3). These images are then processed and combined in a virtual environment where the user can control the virtual light source in all directions or simulate light from different angles and of different intensity or wavelengths to illuminate the surface of the artefacts under investigation. This use of the virtual light source facilitates the inspection of the given object and reveals details which are not visible at the naked eye or in normal conditions of light. This is all the more effective when we are dealing with objects of very small dimensions (e.g., sealings or papyri inscriptions) or not easily readable because of their state of preservation. This is exactly the case of the “Verso” of the Palermo Stone, which is engraved with hieroglyphic signs which are not only extremely small (sometimes even a few millimeters) but also scarcely visible because of the state of disrepair of the artefact (see fig. 1). The result is that all the transcriptions of the “Verso” carried out so far are fraught with lacunas, which make the texts incomplete and often quite incomprehensible.

The full transcription and interpretation of the “Verso” of the stone is still in progress and the complete results will be published next year in a specific monograph from the Czech Institute of Egyptology. For the moment, we can maintain that the Stone is now completely readable and does not keep any more secrets in terms of readability of its text. The bottom of the “Verso”, in particular, was the most complicated one. This includes a diverse range of information on the reigns of the second and third king of the Fifth Dynasty, i.e., Sahure and Neferirkare, which are now completely unveiled. Among them we can certainly mention the existence of the sun temples of these two kings which are mentioned at least 4 times in this part of the stone (see fig. 1). Some scholars have doubted in the past about their existence by suggesting that these two kings might have in fact reused the temples of their immediate predecessor Userkaf. However, the mention of the temples on the Palermo Stone, and the related information engraved therein – connected with both the architecture of the temples and the pious donations provided by the kings to the gods of the temples, that we are now able to read in their entirety –, definitely dismiss the “reuse theory” and further prompt for their archaeological search. In fact, these temples are known only from the historical sources but have never been unearthed or even localized. This is, among others, one of the targets of the research project on the solar cult and architecture in the Third Millennium BC, which is currently ongoing in the Czech Institute of Egyptology with the support of the Czech Science Foundation (GAČR), and within which the new research on the Palermo Stone has been funded and carried out.

Furthermore, the application of the RTI technology to the Stone was planned not only to improve our reading of the hieroglyphic text but also to facilitate our comprehension of its historical and material aspects. In fact, the RTI facilitates the inspection of the surface aspects of the production of the inscriptions, such as the technique used to chisel out the signs, the presence of scratches, graffiti, and/or other intentional damages on the stone as well as, indirectly, the study of the paleography of the inscription, which is the main element to try to establish a precise date of the object.

At the same time, in order to contribute to a better understanding of the material aspects and manufacture of the stone, in mid-September 2018, the head of the project (Massimiliano Nuzzolo) was again in Palermo to carry out a petrographic analysis by means of the Dino-Lite microscope (fig. 4), thanks to the help of a specialist of RTI and geo-archaeology from the University College of London (Kathryn Piquette). As a matter of fact, nobody has ever done a petrographic analysis of the stone and the related fragments to understand the specific composition and nature of each fragment. This kind of analysis is also pivotal to verify (or dismiss) the hypothesis that all the fragments did really belong to the same stela/inscription, and consequently, to the same period. In fact, some scholars in the past have even doubted that some of the fragments were authentic. The very preliminary results of this analysis reveal that the Stone is actually made of basalt, and not of diorite as usually thought and written in text books, and that this kind of basalt has also a significant presence of olivine and feldspar intrusive, which make the stone even more characterized from a geological standpoint.

The future scope of the project will thus be to carry out similar RTI and microscope analysis of the other fragments supposedly belonging to the Palermo Stone, which are kept in Cairo and London. This will hopefully contribute to clarify both the original provenance of the fragments from the same object and the nature of the historical information provided by the annals, given that the fragments kept in Cairo are even less well preserved and readable than the Palermo Stone. 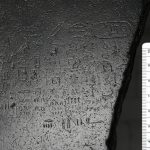 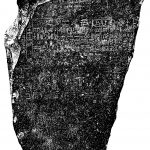 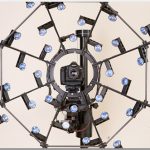 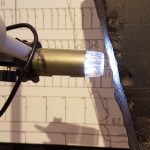 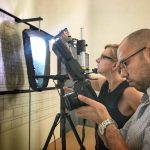 Úvod > News > New research and insights into the Palermo Stone