Report on Punctuated Equilibria Paradigm and Security in the Modern World 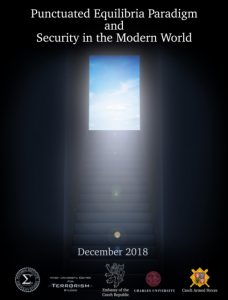 Potomac Institute for Policy Studies (Arlington VA) has published a report Punctuated Equilibria Paradigm and Security in the Modern World, together with the Embassy of the Czech Republic in the United States of America, Charles University and Czech Armed Forces. The full report is freely downloadable on this link. Among the contributors is Prof. Miroslav Bárta, director of the Czech Institute of Egyptology.

An assessment of contemporary national, regional, and global security concerns may cause one to recall two ancient warnings . The first is attributed to Job: “for all the things which I greatly fear is come upon me, and that which I was afraid of is come unto me .” The second describes the four horsemen of the apocalypse representing agents of conquest, famine, war, and death, and perhaps even ushering in the beginning of the end of the world .

Indeed, since the dawn of recorded history, predicting, preventing, mitigating and bringing these and related individual and collective challenges under manageable levels have been a permanent fixture of humanity’s saga . The current report on “Punctuated Equilibria Paradigm and Security in the Modern World” is one of the most recent efforts to provide broader academic analysis on the complex threats and responses involved .

The distinguished contributors to this report initially presented papers on this topic at a special seminar held on February 27, 2018 in Arlington, VA under the co-sponsorship of the Potomac Institute for Policy Studies, the Inter-University Center for Terrorism Studies, the Embassy of the Czech Republic in Washington, D .C ., Charles University in Prague, and the Chief of Staff of the Czech Armed Forces . More details on this event will be discussed subsequently in this Introduction . At this stage, a brief academic context is in order .

More specifically, the theories of “Punctuated Equilibria” and “Multiplier Effect” have been gain- ing importance and significance, including to militaries around the world . Developed versions adapted to complex societies may be considered one of the most promising and strategic avenues of research in the social sciences . These two theoretical tools offer a way to anticipate major events and conflicts that may come into being and that better knowledge of the universal processes and laws governing any complex society is of critical importance for the 21st century .