Preliminary results of the archaeological season at Abusir, autumn 2005 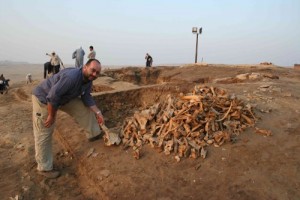 In accordance with the research programme of the Czech Institute of Egyptology of the Faculty of Arts, Charles University, the first stage of excavations at Abusir planned for the archaeological season 2005-2006 took place in September and October of this year. Its aim was above all the verification of several hypotheses relating to the development of ancient Egyptian architecture, society and religion in the 3rd millennium BC. The work concentrated on archaeological exploration of areas that had been selected in advance on the basis of surface survey, satellite imaging and geophysical measuring.

In the course of the first two weeks, the hitherto oldest mastaba tomb discovered at the Abusir necropolis. It is dated to the 28th century BC., i.e. approximately to the time of King Djoser, the builder of the oldest Egyptian pyramid. In the course of the millennia that had passed since its construction, the structure has suffered great damage. It was nonetheless possible to document the remains of its mud brick superstructure that contained a cultic chapel and the entrance to the unique substructure. The substructure of the tomb is located 15 metres under the desert surface and consists of a corridor in the shape of the letter U. Numerous storage rooms branch off the corridor to the east and west.

Inside, hundreds of large and small fragments of vessels of travertine, diorite and other stone types were discovered. They formed the original burial equipment of the tomb owner, whose name is hitherto unknown. Later after the burial, the tomb was flooded in the course of torrential rains, probably at the end of the Old Kingdom (end of the 3rd millennium BC). Nonetheless, traces of the original burial have been found. The tomb belongs to the richest structures of its kind and its owner must have undoubtedly held high functions at the royal court. In the course of the 1st millennium BC the superstructure of the tomb was used for the burial of sacred animals (so far, about 40 mostly damaged burials have been discovered), the analysis of which will be performed during next year. 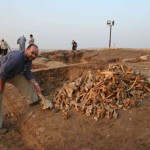 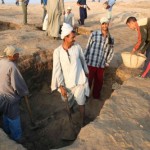 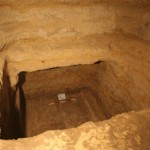 In the course of October, minor probing works were conducted in the southwestern part of the Abusir concession. A large structure of approximately square ground plan made of mounds of clay (tafla) and stone debris was discovered. Numerous finds of cow’s horns and bones indicate that it probably is the cemetery of sacred bulls (Apis cattle?) connected with the nearby cemetery of sacred Apis bulls – the Serapeum in north Saqqara. In future, it will be necessary to locate the entrance to the underground part of this structure.

To the east of the presumed cemetery of sacred cattle, shafts and large mastaba tombs were localised by probes. Their exploration is planned for the near future.

The drawing documentation of the relief decoration of the mastaba of Qar was also conducted, as well as the analysis of older finds from the burial equipment discovered in the complex of vizier Qar and his sons for publication in the next year, reconstruction and restoration works in the tombs of Qar and Inti and in the mastaba of Ptahshepses, and documentation works.

In the end of the autumn phase of the archaeological season, the photographical documentation of the statues of King Neferre discovered in Abusir by the Czech team in the 1980s will be conducted in the Egyptian Museum in Cairo (for the planned publication).