Common Plants of the Western Desert of Egypt 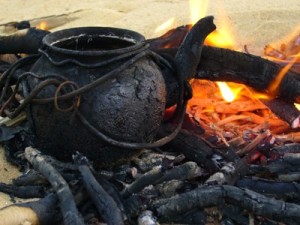 Western Desert is a harsh environment for plant growth. The hot summer (sometimes above 50°C) and the extreme daily temperature fluctuations in winter (from above 30°C in the day to below zero at night) contribute to this. Of course, rainwater is extremely rare item there. Heavier downpour may occur only once in decades. Nevertheless, when it does occur, the rainwater quickly penetrates the permeable sand to a depth beyond the root zone. The seeds of only few plants succeed in germinating under such conditions.

In large tectonic depressions, oases were formed where artesian water reach the surface. Over a long history of human settlement the local biota was severely affected by humans. Inside oases, land was transformed into cultivated fields and orchards. As the result, it is difficult to ascertain what natural vegetation had been there before human interference. After reaching the surface and irrigating agricultural land, the water drains to lowest level of the oasis floor, where it forms pools or lakes. Because of high evaporation, this water becomes highly saline. Wetlands and salt marches that form around pools and lakes are rich in vegetation and, together with cultivated fields and often stabilised sand dunes, are the main features of inhabited land.

In Egypt, about 700 plant species commonly occur. According to the most recent analysis (Boulos 1999 – 2005), the total number of vascular plant species in Egypt is 2075. Substantial part of this diversity is confined to wettest regions – Mediterranean, Sinai Peninsula, and Gebel Elba, a mountain range that supports Acacia woodland. While not counting its northern Mediterranean fringe, Western Desert is the poorest regions in the country in terms of plant diversity.

Our work was made possible thanks to the existence of literature sources, especially to excellent Flora of Egypt by Loutfy Boulos (1999-2005). From this four-volume monograph (see the reference below) we have adopted taxonomic nomenclature and extracted information about specie’s characteristic habitats (beyond our own experience), geographical distribution, and local Egyptian names.
We are very grateful to Jana Osbornová for sharing her broad knowledge on flora and vegetation of Egypt, and to Miroslav Bárta, the head of the grant project (Grant Agency of the Academy of Sciences of the Czech Republic) under which our activities were made possible.

Selected literature on the flora of Egypt